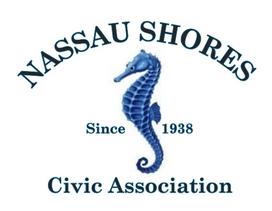 Minutes from prior meeting approved.

Pillar fund currently stands at $14,275.  The project is narrowed to two options, with one being the complete rehabilitation of the existing pillars, along with new plaques and seahorses.  The second being a reimagining of the existing pillars with a ledgestone veneer, along with new plaques and seahorses.  The missing pillar on West Shore Drive will be constructed to match the others.  Michael Masone discussed both options with the community and showed visuals.

Motion brought to the floor by residents to only permit current dues paying members to vote on pillars designs.  Unanimously approved by all 59 attendees.

Unveiling of new Nassau Shores sign donated by Michael Masone, to be displayed on East Shore Drive where old sign was destroyed in wind storm.

Rich Milano was introduced as the new Events Coordinator.

A special meeting concerning the Bayfront Park was announced for Wednesday, March 25.

A brief history of the park was discussed.

The operators of the BP gas station addressed the community regarding any issues concerning the station.